After the release of the first game the developers almost every year make the players happy with a new series. A total of 23 parts have been released. Initially, before the Underground series release, the story was based on the races on picturesque and beautiful tracks and chases with cops. The developers decided to change this by making the game more interesting.

Need for Speed: Most Wanted

The authors added a number of new features: the day was replaced by the night, the fragments of comics were added – clips with live actors and an interesting storyline.

The new part features already forgotten police and supercars. The game captures the battles with the cops, where each chase gives a real adrenaline rush, turning into a hardcore test.

The Most Wanted series is a true compilation of all the successful parts in the twelve years of the game’s existence.

This part was inspired by the popular movie “Fast and Furious”. Electronic Arts replaced picturesque tracks and expensive supercars with the night city streets and popular cars. The series created a real sensation in the genre of arcade racing. It features a simple, but at the same time, a full-fledged company with the featured scenes. Players have access to several modes: from racing on the ring to drifting. The car control is fun and intuitive. The players can also enjoy the multiplayer mode. Full tuning is available, both outside and inside the cars, which captivates for many hours.

In this part the player can race through the city at night. There are also police chases and a park of ordinary cars and supercars. The mode “Canyon” is added: this is the race in two stages. Races are exciting and tense due to the possibility to easily get off the track into the precipice, because the bumpers are easily broken. This can also happen to an opponent, which is considered an automatic win.

In this part the districts appear that have to be captured. A mode “Teams” is also added, which makes it possible to hire racers in the player’s team. Each has its own specialization, which is activated after giving orders. One can block opponents, another can find a shortcut on the track, etc.

Need for Speed: The Run

In this part the players are presented with several new features. Here the main this is the game plot. The main character will have to take part in a showdown with the mafia and come out the winner in the race from San Francisco to New York. In this part the main character gets an opportunity to get out of the car. Sometimes he will have to abandon the car and run away from the bad guys. All the races are part of a massive race. There are a fascinating variety of locations: deserts, forests and rocks, villages and cities, races at night and day.

In this series the racing was moved from the streets to the professional racetrack. The car can now be smashed to smithereens. There are no cops in this part. No more risking illegal racing and hiding from the authorities. This allows you to drive freely around the world. The player can turn a standard car into a rocket, which is capable of space speed, but it is not easy to cope with it. After each race the car will need to be repaired, replacing old parts or restoring them. 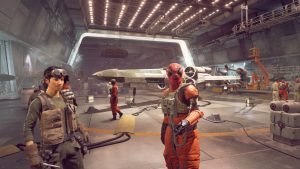